The Atlantic world is a historical construct that defines how four landmasses that border the Atlantic Ocean—Africa, Europe, North America, and South America (including the Caribbean and Central America)—interacted and influenced each other from the 1420s until the middle of the seventeenth century. It serves as a means for examining European contact as well as exploration and settlement in Africa and in the Western Hemisphere. The rise of the Atlantic world created new global economies and social systems that expanded markets, redistributed wealth, and transformed cultures in the four regions.

Europe in the mid-fifteenth century was divided linguistically, politically, and economically. Most people lived in small villages organized in a patriarchal manner. The continent was slowly recovering from the Black Death, a plague that had decimated as much as one-third of the European population in the mid-fourteenth century.

As the nations grew in population and economic strength, they became more urbanized and affluent. Moreover, strong leaders emerged in Spain, England, France, and Portugal. All these factors promoted a desire for commercial expansion and zeal to spread European power and the Christian religion. Fueling this outlook was the desire to reach the riches of Asia by avoiding the long and dangerous trade routes of North Africa and Southwest Asia controlled by Muslim groups.

Portugal was first to act on these impulses. Under the leadership of Prince Henry, Portuguese sailors made contact with the native peoples and began mapping the west coast of Africa in the 1420s. Over the next 60 years, they established trading posts along the coast and in 1441 began taking African slaves to work on sugar plantations on the islands of Madeira, the Azores, and the Canaries. It is estimated that in the last half of the fifteenth century more than 40,000 Africans were carried off to work on these islands.

The Europeans encountered a variety of African cultures, economic systems, and religions. The peoples inhabited vast deserts, grasslands, and tropical forests. Although most were rural residents, some Africans lived in towns and cities that rivaled those in Europe. Farming predominated, but there were also artisans who worked in metals and ceramics. Africans practiced many religions, although the Islamic faith was dominant in the Upper Guinea region. While slavery existed in Africa before the Portuguese arrived, African slavery differed greatly from the European system of exploitation and cruelty. Under the African system of slavery, slaves had few opportunities, yet they had some legal protections and the institution was neither permanent nor hereditary.

Widespread European settlement of the Western Hemisphere began after 1492, when Christopher Columbus made a series of voyages for Spain. Although Columbus did not discover the Northwest Passage, he began what is known as the Columbian Exchange, which transformed the Atlantic world. This transfer of plants, animals, and, regrettably, diseases among the four regions of the Atlantic world altered world history. The Europeans introduced crops such as wheat, rye, and rice to the Americas. In return, the indigenous peoples contributed maize, chocolate, and peanuts to the European diet. In addition, the Spanish brought horses with them and they discovered new species of animals as they explored the land.

Most tragically, the exchange spread disease throughout the Atlantic world. Interacting with the peoples of the Western Hemisphere, the Europeans and Africans carried the germs of smallpox, typhus, measles, and malaria with catastrophic results. Because they had never encountered these diseases, the native people had no immunity from them. It is estimated that as many as 80 million people perished in the first 150 years of contact among the various groups.

Spanish Ascendancy in the Western Hemisphere

The Spanish built on Columbus’s voyages by conquering the peoples of Mexico, Peru, and what is now the American Southwest. The Native Americans exhibited vast diversity in the size and complexity of their societies. In Mexico, the Aztec were a warlike people who built great cities such as Tenochtitlán, with a population of 300,000 and imposing pyramids, temples, and palaces. The Inca of Peru had a well-trained army, great quantities of gold and silver, and intricate networks of roads and bridges. The Pueblo, Hopi, and Zuni of the American Southwest were simpler people who lived in villages and survived by farming, hunting, and gathering.

These groups worshipped multiple gods, allowed women some political influence, and believed in communal property. Part of their downfall was their inability to unite against the invaders. Often the conquistadors turned one Indian group against another, and by the middle of the sixteenth century, Spain controlled most of the Caribbean, the American Southwest, and South America.

Spain ruled, but did not settle, its vast empire. In the first century of colonization, only 250,000 Spaniards came to the widespread colonies. While marriage between the conquerors and conquered was discouraged, a people of mixed white and Indian heritage, known as mestizos, grew rapidly in Spanish America. In 1502, to overcome labor shortages, the Spanish began to import African slaves to work their mines and sugar fields.

After the Treaty of Tordesillas (1494) gave papal approval to Spanish claims to much of the Caribbean and South America, conquests began with the destruction of the Aztec empire in Mexico by Hernán(do) Cortés. Between 1519 and 1521, Cortés destroyed the capital city of Tenochtitlán and caused the death of the Aztec leader, Montezuma. Following in the footsteps of Cortés, Francisco Pizarro brutally conquered the Inca of Peru in 1533. Although the Inca had a powerful army and a far-flung empire, they were no match for the technology and ruthlessness of Pizarro and his forces. Pizarro’s invasion set the stage for further Spanish expansion into present-day Chile and Columbia. 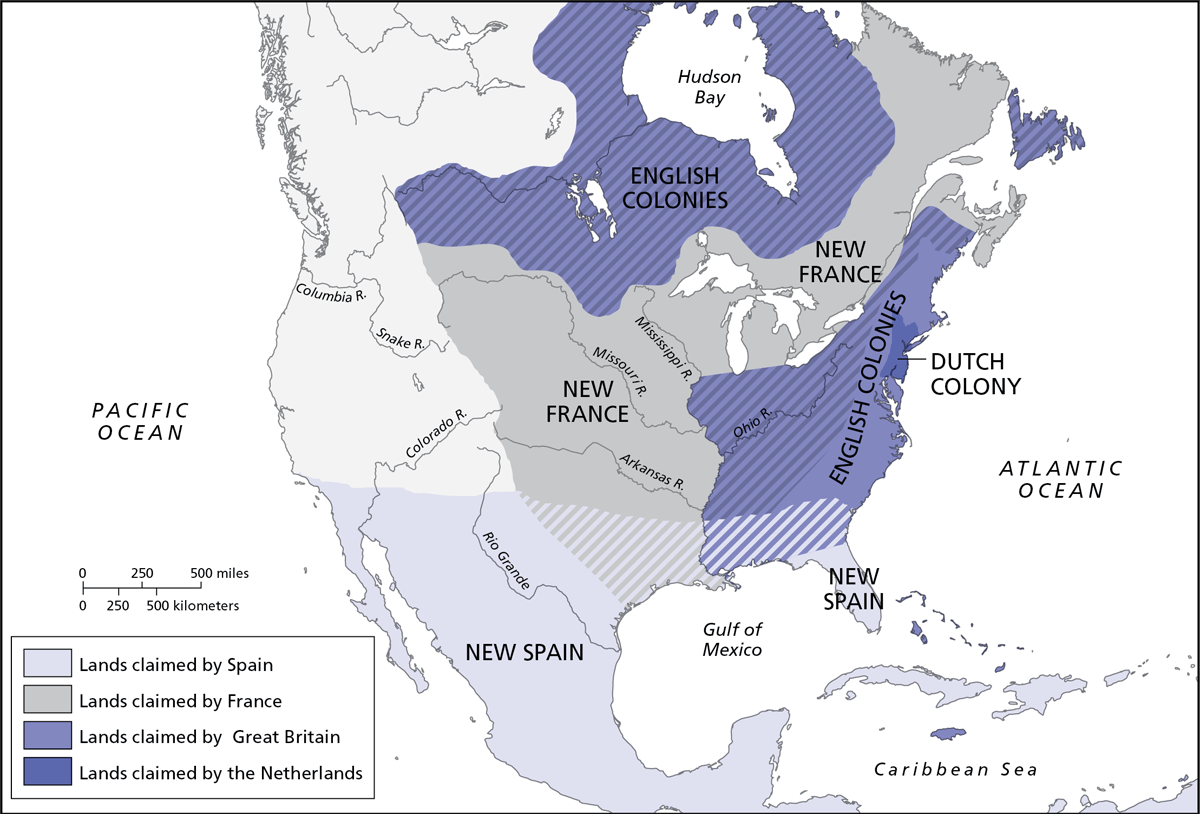 To shore up its northern borders against French and British expansion, Spain sent Hernando de Soto to explore Florida and what is today the southeastern United States. Between 1539 and 1541, he mapped the area from the Savannah River to what is today Mobile, Alabama. In 1565, the Spanish established St. Augustine, Florida, as the first permanent European settlement in North America.

Other conquistadors were active in the American Southwest. In 1540, Francisco Coronado embarked on a search for the fabled “Seven Cities of Gold.” While he did not find gold, he claimed the areas of what are today New Mexico and the American Southwest for Spain. In addition, by the early seventeenth century, Spain had sparsely settled outposts such as Santa Fe (1610) in parts of New Mexico.

Spain exercised tight control over its empire. It established a House of Trade and the Council of the Indies that regulated trade, made laws, and appointed governors. At the local level, the Spanish employed the encomienda system, which rewarded the conquistadors and exploited the natives. Officials extracted labor and tribute from the Indians in return for protecting and Christianizing them. By the 1550s, people such as Bartolomé de las Casas became appalled by the system’s cruelty and denounced it as a form of slavery. His writings helped end the arrangement by midcentury.

The abuses of the indigenous peoples triggered the Pueblo Revolt in 1680 in New Mexico. A San Juan Indian and holy man named Popé led an uprising that captured Santa Fe, drove the Spanish from New Mexico, and destroyed the Catholic Church in the colony. Only fourteen years later did the Spanish suppress the revolt. The brutality of the Spanish rule created the Black Legend, which depicted the empire as murderous, cruel, and tyrannical.

England and France Join the Race for Empire

Neither England nor France challenged Spain’s sixteenth-century colonial dominance. Throughout most of the 1500s, England grappled with internal problems. John Cabot explored Newfoundland in the 1490s, but no settlements resulted from his journey. Only in the 1580s did England embark on colonization. Richard Hakluyt’s writings helped promote expansion, and between 1585 and 1587, England established a short-lived colony at Roanoke Island, North Carolina. Beginning in the first half of the seventeenth century, however, England successfully created colonies throughout North America and the Caribbean.

France also came late to colonization. Samuel de Champlain settled Quebec in 1608, but there was little royal support and the colony did not grow. The French sought furs and good relations with Native Americans, and few French settlers came to Canada. In the mid-seventeenth century, Jean-Baptiste Colbert, minister to Louis XIV, renewed France’s efforts in Canada as well as in the Caribbean area. Colbert populated Quebec with indentured servants and criminals and saw the value of the sugar islands in the Caribbean.

All European countries had difficulty populating their colonies. Life was hard and dangerous. Europeans quickly enslaved the native peoples and Africans to solve their labor problems. Although France attempted to coexist with the Indians, England and Spain took the natives’ land and destroyed their way of life. European expansion laid the foundation of the modern Atlantic world as it destroyed native peoples and cultures in its wake.